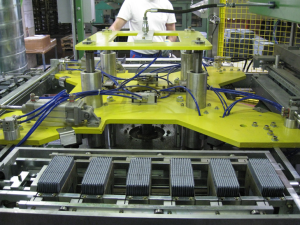 The COS enables to joint the lugs of the groups to the relevant connections.

In this station the operator loads the plate groups in the blocking and transport pliers, afterwards he confirms the load end.

After aligning the lugs, a vibrating, centering and cleaning operation of the plate groups is carried out. The lugs are pre-heated in this station.

The main turntable transports the groups with the lugs, which were turned down in the melting station and positioned on the mould. A melting pot, heated by self-adjusting elements, supplies the melted Pb to the moulds.

Special adjustable spoons draw the melted Pb from the pot and pour it in the cavities of the mould to get the connections. The mould is in the centre of the melting station and it changes according to the battery type to be made. It is built and equipped with accessories that enables a quick change.

The groups are transported with the lugs in lower position by the main turntable in the unload station. The plate groups coming from the melting station are turned for 180°, and a mobile platform comes up to support them. Now the plate groups are ready to be introduced in the jar.

Each working station is equipped with a vacuum system. The hoods convey smokes and dusts to a main tube, and from there to the depuration system.

The operator manually positions the plate groups coming from the enveloping machine in the blocking pliers, and confirms that the operation has been carried out. The pickling and cleaning phase is done by plunging the lugs in a special bath, in order to deoxidise the lugs surface.

After preparing the lugs, the plate groups are taken to the melting station.

The dosing spoons carry the melted Pb in the mould cavity, and the lugs are plunged in tanks containing the melted Pb.

The Pb quantity is adjusted by means of spoons, which draw the metal from a pot heated by heating elements.

A furnace near the machine melts the necessary Pb ingots, and the pump sends the melted metal to the pot.

The mould is positioned between the feeding Pb spoons, and a special mobile mould holder enables to change the mould quickly and easily.

The heating elements inside the mould maintain the right Pb temperature when the Pb is poured inside the mould cavity. Furthermore, a water cooling circuit is intended to enable a quick Pb cooling when it is already poured in the mould. After the melting operation and the creation of connections, the turntable goes up, the groups turn for 180° and go to the unload station.

In this station the cells are opened, and the operator can withdraw the plate groups and introduce them in the jar.