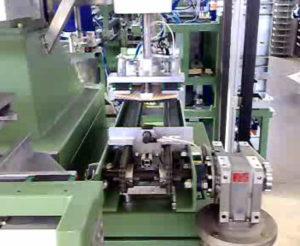 The assembly line for traction elements has the purpose to do some workings and controls of the element. An assembly line for traction element can be considered composed of the following equipment:
Conveyor completed with separator device, which sends an element per cycle to the following equipment.
Lid placing machine: it has three lid stores with capacity of 30 lids each. This equipment has a pneumatic ‘pick and place’ system that takes the lid from the conveyor placed below, and deposits it on the element centred before. The lid placing machine is functional for a manufacturer that produces a high quantity of elements of the same type.
Heat sealing machine: it has the purpose of closing the lid on the vase. The element arrives inside the machine thanks to a centering device that stops it. The suckers attached to centring device straight the four sides of the element, in order to get the best coupling between lid and vase. The lid taking device takes the lid and the heating plates inserts itself between the lid and the vase, so that the plate heats the surfaces and connects the lid and the vase.
Seals placing machine: it is composed by a circular selector and a linear selector that has the purpose to bring the seals to the selecting device with the correct orientation. An electrical-pneumatic system ‘pick and place’ takes the seals and positions and push it in the holes of the lid of the element centred before. In case the leakage between the holes and the seals is not obtained by interference, but the elements require an assembly of the ferrules to stop the seals, it is necessary to install two additional selectors, one circular and one linear, and a selecting device where the ferrule arrives in the correct way and it is taken by an electrical-pneumatic system ‘pick and place’, which places and screws the ferrule on the element, thanks to a pneumatic screwer.

Post welding machine: this machine is composed by heat sealing head completed with welding oxyacetylene torches, moved by a motor-reducer with height regulation system. Trimming of the welding flex: it has a cutter place at the extremity of an arm. After the element has been blocked under the rotation unit, a pneumatic cylinder pushes the arm against the element. The element rotates thanks to a rotation unit, allowing the cutter to remove the welding flex along the sides. An aspirator (supplied together with the machine) allows to pick up the plastic scraps that are created during the cutting.
Leakage tester: it has a pneumatic cylinder where the air filling nozzle is attached. This is connected to a series of valves and to a transducer, which verifies the correct welding between lid and vase. Once the element has arrived inside the machine and the nozzle is inserted in the hole of the lid, the element is filled with air up to the pressure previously set. The filling valve is closed and takes the first reading of the value of pressure, saving it in the PLC; after some time the second reading is taken, after which the difference between the two readings is compared. If the difference is inferior to the range, the element is good and continues, otherwise the element must be discarded and this is signalled by a lamp and an acoustic signal.
At the end of the assembly line, it is possible to install a manipulator for creation of element pallets.
The transport conveyor can be realized with a step-to-step system or with rolls. In both cases, adjustable guides are installed according to width and height of the element to work.
TECHNICAL SPECIFICATION
Sizes of assembly line: they are different according to machines and productivity. We specify the sizes for assembly line composed as in this leaflet:
12000 mm (length) x 1800 mm (width) x 2600 mm (height)
Voltage: 380V+Neutral—50 Hz
Sizes of element to work: Length 158 o 198; Width from 45 to 230; Height from 250 to 730
Productivity: 2 elements per minute