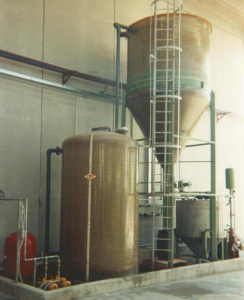 The paste dispersed during the pasting of plates and during the washing of machines, pasting machines an mixers can be recycled being used again in a certain proportion in new negative paste batches and partially in authorized smelter unit.
Therefore the saving of lead only from paste recycling in negative batches preparation reaches about 60 tons in production of 1000 000 batteries a year.

DESCRIPTION OF PROCESS OF PASTE REUSE
The paste dispersed from the pasting machine would be collected in washing waters and poured into a well. Using the compressed air or stirring rods and adding some water the mix is diluted and reaches a certain density, afterwards it is pumped in a storage sedimentation tank.
From the tank the needed quantity of sludge is taken and delivered to a smaller tank for its homogenization, the rest of precipitated sludge is poured into containers and then it is sent to the smelting unit for its recycling. The cleaned water is delivered to the purifying machines (or partially is reused in negative batch preparation).
As an alternative to pouring into containers is the way where the excessive sludge is sent to other machines for its dehydrogenation using the press filter with sending it to smelting unit that has a higher percentage of use (final humidity is 30% instead of 80%)

In homogenizing tank sludge is constantly mixed with stirring rod and adding of water, so that is reaches the needed density. Then it can be demineralized or recycled, being taken from the sedimentation tank or from the network, so it would be pumped by the membrane pump to th+ tank that feeds the mixer every time the mixer requires it. During the pauses sludge is constantly mixed up in the homogenizing tank.