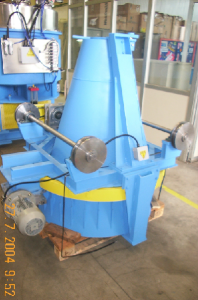 The paste distribution cone enables to collect the paste coming from the mixer and unload it in the pasting hopper.
PASTE CONE.
– The cone containing the paste is made of thermally flatten steel to eliminate the tensions of the previous
works. A fifth wheeler supports the cone enabling a complete turn of the cone by means of a gear motor, this system
facilitates the paste ejection at the paste discharge moment in the paste hopper.
A blade inside the cone removes the paste from the cone sides during his rotation and let it fall down in the pasting hopper.
The cone has an automatic opening/closing system, which enables the ejection of the paste at the discharge moment.
Cone support system A welded steel framework supports the cone. A gear motor fixed on the structure transmits the rotation movement to the cone. The system slides on lines, which guides the cone from the mixer up to the pasting machine.
Electricity : 380 V, 50 Hz (three-phases)
Dimensions : Length 1500 mm
height 1600 mm
Width 1400 mm
Installed power : 6,2 kW